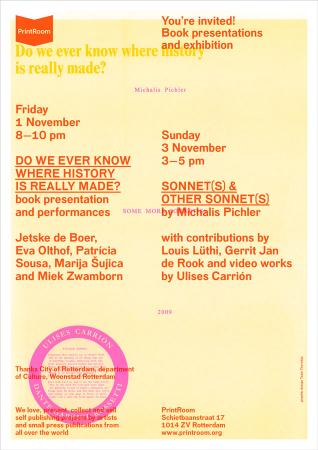 SONNET(S) & OTHER SONNET(S)
Ulises Carrión, Michalis Pichler,
November 3 - December 3, 2013
PrintRoom, Schietbaanstraat 17, 3014ZV, Rotterdam, NL, www.printroom.org
On Sunday, November 3rd from 3-5pm we invite you to join us for the opening of SONNET(S) & OTHER SONNET(S) and a reading afternoon with contributions by Louis Lüthi and Jan de Rook.
The exhibiton brings together the artist's publication "SONNET(S)" by Ulises Carrión, 1972 and "OTHER SONNETS" by Michalis Pichler.
In 1972, Ulises Carrión produced his first artist's book "SONNET(S)" which consists of a 44 variations of a sonnet by Dante Gabriel Rosetti titled "Heart"s Compass".Using the langage like a material, Carrión writes Rossetti's poem over and over again on a typewriter, in slightly different versions. This book today is considered Carrión’s first “artists book”, where he still uses language, but quite differently.
In 2009 Michalis Pichler, in a similar approach but using a computer, probably word or open office, created 44 new variations and published a book titled "SOME MORE SONNET(S)". - On the last page of this book announced a multitude of OTHER SONNET(S), mostly imaginary .
The show at PrintRoom, Rotterdam sees the realization of "TEN OHP SONNETS"with the use of ten Overhead-Projectors as well as one out of "SEVEN ADVERTISED SONNETS", published in the Utrecht-based magazine Metropolis M. This series in progress will either remain unfinished or will have been concluded once seven advertisements have been published, six of them by other galleries.
A selection of other bookworks by Ulises Carrión and Michalis Pichler will be on display. On occasion of this show PrintRoom has produced a pocket edition of "1111 RISOGRAPHED SONNETS, STAPLED, NUMBERED AND SOLD IN CHUNKS OF 11", which is available for sale at the Gallery.
The show will also a feature a variety of Ulises Carrión’s video works, among them “Bookworks revisited”, “Aristotle's Mistake” and “Gossip, Scandal and Good Manners”.
-----

Born in the Mexican town of San Andrés Tuxtla in 1941, Carrión originally had his eyes set on a literary career – his book of short stories with the intriguing title La Muerte de Miss O was published in Mexico in 1966 — but after graduate studies in England, he ended up in Amsterdam where he devoted what remained of his abbreviated life (he died in 1989, from AIDS) to artist’s books (as a maker, seller, archivist and theorist), performance art, mail art, video and film. Carrión is a still elusive figure whom poet Mónica de la Torre recently described in Bomb Magazine as “perhaps Mexico’s most important conceptual artist.”
Publications (selection): For Fans and Scholars Alike, Visual Studies Workshop, Rochester, 1987, In Alphabetical Order, Cres/Agora Studio, Amsterdam/ Maastricht , 1979, Arguments, Beau Geste Press, Devon, 1973, Looking For Poetry/ Tras la Poesía, Beau Geste Press, Devon, 1973, Tell me what sort of wallpaper your room has and I will tell you who you are, In-Out Productions, Amsterdam, 1973, SONNET(S), In-Out Productions, Amsterdam, 1972

Louis Lüthi is an Amsterdam-based graphic designer and writer. In his fictional story Infant A he follows Ulises Carrión as he walks on the High Line in Chelsea, discussing two books simply titled A. Infant A is published by Paraguay Press, as part of their serie The Social Life of the Book.

Gerrit Jan de Rook is an art historian and freelance exhibition maker, The Hague. You can read his article for Metropolis M on Ulises Carrión here.
Gerrit Jan de Rook presents in a performative way Carrión’s book ‘Tell Me what Sort of Wall Paper Your Room Has and I Will Tell You who You are’.