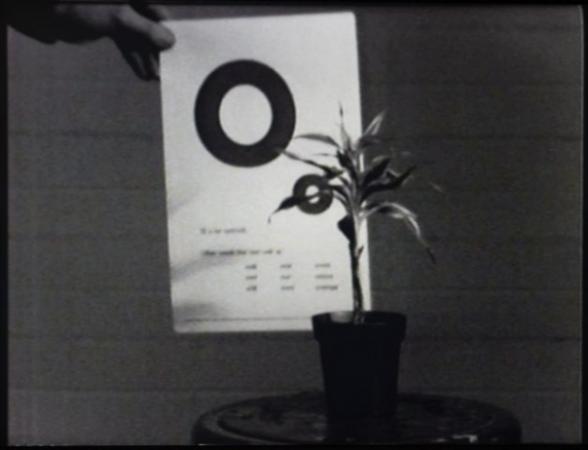 artist Marcel Broodthaers trying to write a text under the rain. This

attempt is, no doubt, condemned to failure. He seems aware of it

but, nonetheless, the expression of his face and the writing

ceremony remain unalterable. Maybe, the subject matter here is the

failure itself; maybe, the very idea of a text, or the act of writing, is a

Although spent his entire life buried in letters -maybe because of

that- Broodthaers, together with Roland Barthes, seemed always

distrustful about writing. He found it insufficient, frustrating, and also

unable to make him earn some money. All this reasons forced his

shift to the visual arts realm, where he would find the appreciation

he never found between poets. His pockets remained almost empty.

Nonetheless, the Belgian artist never rejected writing. On the

contrary, he introduced text and writing in his artistic practice in such

an astonishing way that still today, 50 years later, is one of the most

influential modern artists. But there was a battle he declared lost:

there is no way to blend both worlds, the literary and the artistic. He

reached a clear conclusion: artists and poets do not understand

each other, so they do not blend either. Any fusion attempt between

The discourse of this exhibition is based on Broodthaers´ certainty:

visual arts and literature, with exceptions of course, have an infertile

other but, despite the existence of few alchemic miracles,

permeability between them is not that happy and productive

endeavor we are used to listen and celebrate. So, trying not to follow

this “ecumenical” common place, not to fall in the postmodern

concept of cool intertextuality, we propose a group of non-literary

artworks that, paradoxically, use words and texts as medium,

support or inspiration. Because, according to Barthes o Blanchot,

literary field, we collected a series of artworks in which the text

flows, but the literary do not take control."