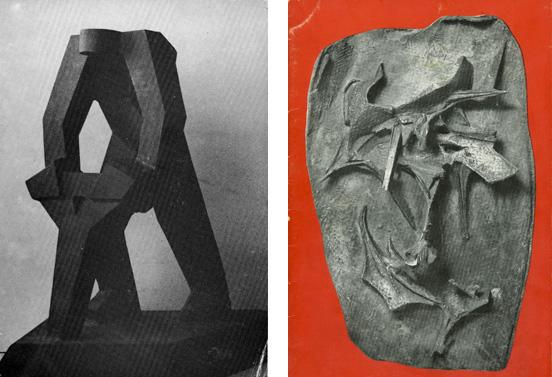 A presentation of Greek artists' publications starting from the 60s and up to contemporary production, a body of work which from time to time is brought back to the surface. It functions both as an archive, as well as 'new', 'fresh' work, reflecting to contemporary art practices, book-making and artists' publishing. The content also relates to art, literature as well as poetry & film.

The presentation is based on a key element which is used to approach the material. The Polygnotan Color Scale.

The colored book covers function as a setting, reflecting the 4 basic colors used by ancient greek painter Polygnotus, a spine on which we can revisit the archive and place it on a specific background.
The Polygnotan Color Scale uses different visual elements than CMYK, as it totally ignores and emits the color Blue. It is essentially another model of composing a full-color image.
The colors used are Black, White, Red and Yellow (Ochre).
The Scale is transformed into books, which conceivably contain a number of reference greek art books.

Identifying the nature of the exhibits as a kind of mechanical model - of a return to Paradise - as an electroshock of resuscitation, not from death to life, but from life to Paradise.
From the lost notion of craft, to the sinful print, and from the theatrical heaven of the Persian garden to a Terirem monologue of the Byzantium, the Polygnotan Scale functions as a matrix-uterus on artist book covers, the first encounter with the cover, a question of which color wins you over, the formal Black, the innocent White, the imperial Red, the solar Yellow, the first encounter which resembles the scent of instant Paradise or Hell.