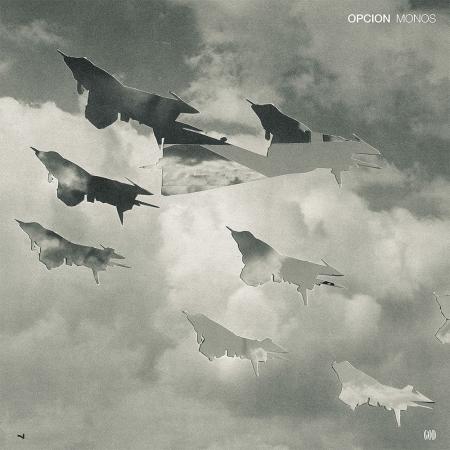 MONOS/UИD is Opcion´s debut album under this moniker, released by GOD Records, the austrian vinyl-label for contemporary music.

On each track of UИD (Side B) Opcion joins forces with one of the guest instrumentalists Maja Osojnik (Paetzold Bass Recorder), Bernhard Loibner (E-Bass) and Kurt

Bauer (Violin), to create three works based on ruptured improvisational recordings which were later edited to become fully constructed pieces.

There may be a name for the type of music produced by Opcion (formerly Ab-Hinc), but if so, it hasn’t been invented yet. In MONOS/UND, we hear hints of John Carpenter, Ben Frost and Ricardo Donoso: a slowly uncurling mass of synths, accompanied by sluggish beats, skittish static and controlled noise.  It’s not quite drone, nor is it EBM; it’s more like nu skool breaks heard through molasses.  One could dance to this, albeit very slowly.  MONOS/UND is better suited for walking on the outskirts of a club, scanning the crowd for a mark; or for cruising dark streets in a car with tinted windows.  The sound is immersive, dangerous, thick with threat; the senses are placed on high alert.  When the music is played for someone, it may inspire fear, but when played by someone, it inspires confidence and power.
The first three tracks (Side A) are purely Opcion: sparse, slow, measured tracks that set the stage for a wild Side B.  On that side, the artist is joined by Maja Osojnik, Bernhard Loibner and Kurt Bauer, which is where we locate the Frost association.  These pieces are heavy with processed electronics and violin, first improvised and then edited.  The tracks are heavy with squall and flutter, storm and drizzle; they tumble and morph and scream.  In doing so, they provide an apt reflection of the cover image, which looks like the after-effect of a raptor trying to claw its way through clouds.
This is a powerful suite of songs that defy easy categorization.  Rife with menacing beats and abstract, cinematic swirls, MONOS/UND is recommended to those who are tired of safe, placid music and want something more damaging and diverse.  (Richard Allen)

OPCION - MONOS/UND (LP by God Records)
From Graz, Austria hails Nikos Zachariadis, who works as Opcion and his working principle is 'reconfiguration' by which he means 'to use existing materials, structures, ideas, techniques, conditions, machines etc., to create new intense, gloomy or strident atmospheres and situations'. He was part of the label Splitterwerk until 2011, and exhibited his work at festivals around the world. This is his first record and on both sides he does something different. On the 'Und' side we find three pieces he recored with a guest instrumentalist, Maja Osojnik (Paetzold bass recorder), Bernard Loibner (electric bass) and Kurt Bauer (violin). It's interesting to note that in none of these three pieces it is easy to recognize any of these instruments, but that's perhaps also because these players themselves use quite some electronics. In these pieces, Opcion (and guests) reach for a more heavy-duty musique concrete sound, leaning heavily towards the use of electronics to transform these sounds into pieces with strong dynamics, ranging from the quiet end to the massively loud ones. The other side also has three pieces and the spins from the label to the outer ring - a nice thing, which is not used a lot. Here Opcion is on his own and adds to the amorphous masses of granular synthesized ambient sounds a whole lot of drum samples, with some strong bass end. These beats not necessarily constitute of dance rhythms, but rather adding an unsettling character to the music and he manages at that. I can imagine this music in a live situation working even better than on record; the relative loudness at home may not work that well for this forceful stuff. Loud and intense, that's what this music is about. Musique concrete spiced up with a strong set of beats. (FdW)
Address: http://www.godrec.com

Coming in from the Graz / Austria-based producer Opcion, better known as Nikos Zachariadis to his friends and parents, is the artists album debut entitled "MONOS / UИD" which has been released via God Records in early December 2k15. Whilst the inside-out pressed "MONOS" side of this six track piece features three Opcion solo efforts based on swelling, highly digital sounding feedback drones and dark'n'abstract, heavily compressed slow motion drums causing a deeply unsettling feel similar to Illbient vibes catered on Mille Plateaux' legendary "Electric Ladyland" compilation series, especially thinking of tunes produced by the likes of Ice or Slotek here, the "UИD" side features three collaborational affairs in which the artist teams up with the likes of Maja Osojnik, Bernhard Loibner and Kurt Bauer for one conjunctional track each. The collaboration with Maja Osojnik sticks out here due to its more lively, aggressive and - in parts - heavily distorted, yet beatless nature, the work with Bernhard Loibner results in harsh, screeching metallic noises, feedbacks and merciless, irregular drum patterns and finally teaming up with Kurt Bauer brings tense, squeaky pulses and eruptive modulations for those who loving their B-movie sci-fi scores and BBC Radiophonic Workshop experimentalism to the fullest. Count us in for that.