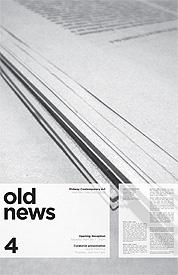 Old News is a non-profit free newspaper organized by Jacob Fabricius, presenting a selection of articles and images cut from newspapers by artists. Premiering at Midway Contemporary Art in Minneapolis on April 5th, Old News 4 will be presented along with Old News 1, 2, and 3 and additional projects, editions, and material by Dieter Roth, Erik Beltran, Thomas Bayrle, Katya Sander, Michalis Pichler, Hans Peter Feldmann and others . The newspapers are free for distribution.

In Old News 2004 (issue 1) and Old News 2005 (issue 2) the artists were to select and cut out articles they found interesting and send them to me with their comments. In 2004, 24 artists or artist groups were asked to cut out four articles each during a one month period - their comments were printed on the front and back cover of the newspaper, separately from the actual article.

In 2005, 8 artists were asked to cut out twelve articles over a twenty-four month period, and their comments were printed next to the actual article in the newspaper. In addition to that, thirteen artists primarily from Los Angeles were asked to cut four to twelve articles during a three-month period (without writing comments on their selections). Thomas Hirschhorn made the Library 'book' insert Emergency Library for this edition of Old News.

In 2006, 10 artists were asked to alter, change, add, edit or scribble on whole newspaper pages. They were asked to select between four and twelve pages during three months. During July and August 2006 4 artists were invited to cut one article each day during the silly season.

During 2007, 14 curators were invited to select the artists and participants and to determine the content of Old News #4. Every two months curators were invited to conceptualize the content of six pages (three spreads) for this broadsheet newspaper. The curators were also asked to think about how the news and news clippings were to be represented in the print version of Old News #4. They were asked to consider if the artists were to write a statement about their choices and how their approach should be explained in the newspaper.