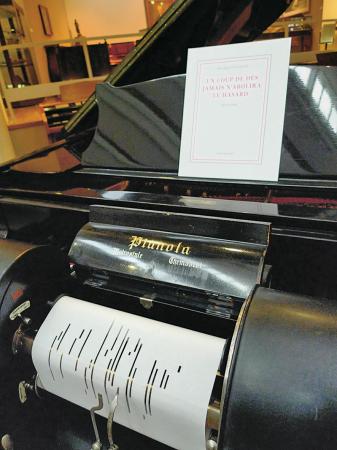 Kunstverein Milano is pleased to announce Exposition littéraire autour de Mallarmé, Michalis Pichler’s first solo exhibition in Italy. Its title recalls an exhibition of the same name by Marcel Broodthaers in 1969 at Wide White Space in Antwerp, Belgium. The exhibition is centered around re-readings and re-writings of Un Coup de Dés jamais n’abolira le Hasard (A Throw of the Dice will never abolish chance) across different media, reproducing that icon of the avant-garde. The exhibition also features the film Une Seconde d’Éternité and a reading room of “greatest hits”.

Michalis Pichler’s Un Coup de Dés jamais n’abolira le Hasard. SCULPTURE is a close copy of the 1914 edition of Stéphane Mallarmé’s poem, but with all the words cut out by laser, in a way that corresponds directly to the typographic layout used by Mallarmé. When turning the pages, numerous shadows are generated by the cutouts. Pichler’s version is juxtaposed with editions by Broodthaers and Mallarmé, who had written Un Coup de Dés jamais n’abolira le Hasard in 1897, and also saw it published in a magazine called Cosmopolis. Mallarmé left copious notes as to how it should be typeset, instructions that were finally carried out 16 years after his death, in 1914. In 1969 this work was appropriated in three renditions as Un Coup de Dés jamais n’abolira le Hasard. IMAGE by Marcel Broodthaers, who replaced the words by black stripes.

A glass version of Pichler’s Un Coup de Dés jamais n’abolira le Hasard. SCULPTURE is installed in the airspace of gallery as a spatial installation or walk-through-book, allthough there is no text displayed on the plates.  Through its “strategic illegibility” (Craig Dworkin) it seems to establish what Jacques Derrida would call “a text, that is, a readability without a signified”.

A reading room will display a variety of books produced in the context of his “greatest hits” series. According to Pichler, "if a work paraphrases one explicit historical or contemporary predecessor in title, style and/or content, this technique is what I would call a "greatest hit”". Featured predecessors include Charles Baudelaire, Mel Bochner, Marcel Broodthaers, Ulises Carrión, Katsushika Hokusai, Stéphane Mallarmé, Monsanto Company, Gabriel Dante Rossetti, Ed Ruscha, Seth Siegelaub, Gertrude Stein, Max Stirner and The New York Times. The exhibition“greatest hits” was on show at Printed Matter, Inc. through June 2015.

One of Pichler’s “greatest hits” on display is the 8mm film Une Seconde d’Éternité. In 1970 Marcel Broodthaers had made a film Une Seconde d’Eternité (D’après une idée de Charles Baudelaire). In the 35mm film Broodthaers writes his signature “MB” in 24 frames, which makes one second. The very same frames were transferred by Pichler to 8mm, where 18 frames make a second. The result reads “MP”, which are Pichler’s initials, in Broodthaers’ handwriting though.

The exhibition is accompanied by the publication of the Italian translation of the artist’s Statements on Appropriation and of his flipbook Une Seconde d’Éternité, co-published by Kunstverein Publishing and "greatest hits"; both designed by Zirkumflex, Berlin.

Michalis Pichler was trained as a sculptor on the preservation site of Acropolis Monuments Athens. He holds diplomas in Architecture from Technical University Berlin and in Fine Arts from Art Academy Berlin Weissensee, and co-founded and organizes Miss Read: The Berlin Art Book Fair and the Conceptual Poetics Day. He works as a conceptual artist, poet and publisher on the imaginary border between visual art and literature. More information can be found here.

A monograph of Pichler’s practice titled MICHALIS PICHLER: Thirteen years: The materialization of ideas was co-published in 2015 by Printed Matter, Inc. and Spector Books.

Kunstverein Milano is a not-for-profit, itinerant curatorial platform for exhibition, research and production of contemporary visual arts and kindly hosted by Il Lazzaretto for Exposition Littéraire.