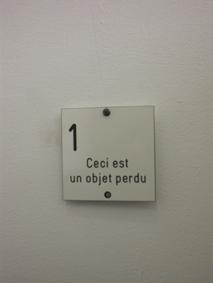 Opening of an exhibition of the work of Michalis Pichler on Wednesday, July 25 2007 from 7 to 10 PM in the showrooms ofRevolver, Frankfurt.

The world is full of objects, more or less interesting. I do not wish to add any more.

I prefer, simply, to state the existance of things in terms of time and /or place.

More specifically, the work concerns itself with things whose inter-relatonship is beyond direct perceptual experience.

Because the work is beyond direct perceptual experience, awarness of the work depends on a system of documentation.     D.H.

If one focuses not only on the found object, but on the context it leaves behind when disappeared, this focus constitutes the objet perdu.     A.K.

After collecting, on the place where it was found and removed, a plastic plaquette was placed, stating "ceci est un objet perdu".

Revolver, Archiv fuer aktuelle Kunst is located at Bethmannstrasse 13, Frankfurt (Main). The exhibition will have a small appendix in the Frankfurter Kunstverein.

In the exhibition on view at Revolver, Archiv fuer aktuelle Kunst, there will also be a documentation of some controversy related to this project, namely its removal from a curated exhibition in the Goethe-Institute NY in May 2003.

new york garbage flag profile, Michalis Pichlers NY project in which he collected and documented discarded paper cups, plastic bags, pizza boxes, newspapers and other mass-produced materials emblazoned with the American Flag was recently published as a book by Revolver.
Photographed in the public waste baskets, gutters and snow drifts of New York where he found them, the individual items are catalogued on a facing page with uniformly formatted information about their location, the date of their collection, number of flags depicted, number of stars, number of stripes, etc. Each record also includes a full transcription of the text found on the item.

Opening of an exhibition of the work of Michalis Pichler on Wednesday, July 25 2007 from 7 to 10 PM in the showrooms ofRevolver, Frankfurt.

The world is full of objects, more or less interesting." data-share-imageurl="https://www.buypichler.com/sites/default/files/15/10/fkv_illustration.jpg" style="position:fixed;bottom:0px;right:0px;">