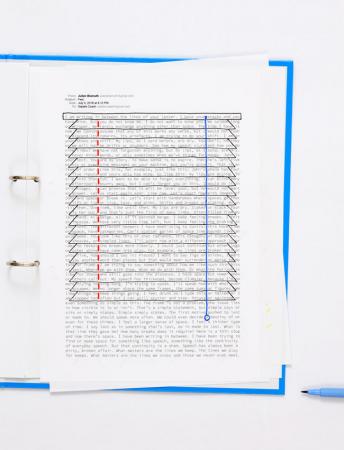 12:15 Alice Cannava
How to sell a contradiction (Occulto)

What are paraconsistent logics? Alice Cannava will playfully explore some appearances and use of contradictions in several fields such as visual arts, literature, and software. Some related to the content, but others related to the production and distribution She will also talk about the reactions to contradictions, with focus on the positive ones: in which situations contradictions work well, are appreciated or can be helpful.

A poetry reading in the form of a Q&A, moderated by Inpatient’s editor.

14:00 Alex Hamburger
The breakthrough tradition: anti-art and poetry by other means

About a century ago, the art world put an end to conventional notions of originality and replication with Duchamp’s ready-mades, the mechanical drawings of Francis Picabia, and Walter Benjamin’s much-quoted essay, ‘The Work of Art in the Age of mechanical reproduction’. Since then, an entourage of artists, from Andy Warhol to Mathew Barney, has taken these ideas to new heights, resulting in very complex notions of identity, media, and culture. This has become so much a part of the mainstream discourse of the art world, that contrary reactions, based on genuineness and representation, have emerged. Culture seems to be embracing such technologies and all the complexity they involve, with the exception of writing, which is still mostly committed to the promotion of an authentic and stable identity at every level.

A Talk about Ostashevsky’s research on the interaction between avant-garde art and poetry, right before World War I, in particular on the relationship between linguistic puns in Cubist collage and in Futurist visual poetry, using French, Italian, Russian, etc. examples, as well as his translation of the Russian Futurist chapbook Tango with Cows.

»Publishing Manifestos« features 75 key texts of critical engagement with publishing from protagonists of the field. The lecture will launch the book and address: Alienation, Seriosity Dummies, A Short Walk Through a Historical Arc of Tension, and address why the Artist’s book is a Problematic Term, Materialzärtlichkeit, Paradigm Shift and Post-digital Turn, and Art Book Fairs as Public Spheres.

this sentence is not available this sentence is a lifetime sentence Cia Rinne’s sentences, originally displayed in exhibitions, have been collected in this new book and joined by “I am very miserable about sentences”, a text consisting sentences by Gertrude Stein and rearranged by Cia Rinne that constitutes the book’s second part.

17:00 Sharon Kivland
Unable to achieve broad recognition in my lifetime, I laboured in obscurity until my death last year

I would propose to read from the as-yet unpublished book Unable to achieve broad recognition in my lifetime, I laboured in obscurity until my death last year, a two-year collection of phrases from exhibition press releases, with certain parts extracted and re-written in the first person. It is hilarious (I am told). I am unable to finish writing the book, so this may prompt me. I already have a collection of endorsements!

Monument to I – a reading from one of twelve constructed dialogues between Stéphane Mallarmé, and selected poets, painters, and philosophers who have responded to Mallarmé’s poem, Un coup de Dés jamais n’abolira le Hazard, (A throw of the Dice will never abolish Chance), including, Marcel Broodthaers, and Quentin Meillassoux. Originally performed while walking towards the sea, towards the horizon, the dialogues re-frame and re-articulate Un coup de Dés.

“Avid reader” is a collocation — a phrase of two or more words that accompany each other more often than would occur by chance. Avid Readers is an event to convene a group of multiple readers according to something other than chance, something like desire (the latin root of “avid”). For this event we will produce a small bootleg edition of a compilation of short essays from the first three and a half issues of Counter-Signals, and other associated texts, and invite a set of friends and strangers in Berlin to read them aloud in the course of an hour.

The poster for Conceptual Poetics Day 2019 is created by Natalie Czech.

12:15 Alice Cannava
How to sell a contradiction (Occulto)

What are paraconsistent logics? Alice Cannava will playfully explore some appearances and use of contradictions in several fields such as visual arts, literature, and software." data-share-imageurl="https://www.buypichler.com/sites/default/files/19/07/cpd19-natalie.jpg" style="position:fixed;bottom:0px;right:0px;">