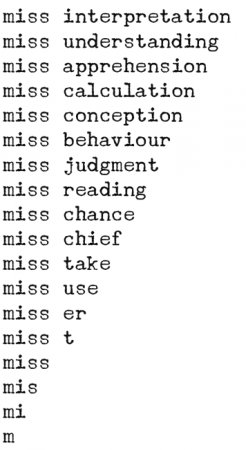 The CONCEPTUAL POETICS DAY is an annual event that explores the imaginary border between visual art and literature.

Egidio Marzona started collecting in the Mid-1960ies when the “linguistic turn” in the art world took place. At the encouragement of art dealer Konrad Fischer, Marzona established his own art gallery as well as a publishing house – Edition Marzona – in the mid-1960s. During this period Marzona began building up his collection, conceptualised along the lines of an immense and encyclopaedic archive. He gathered an almost complete “mosaic”, as he calls it, in the areas of Minimal and Conceptual Art, Arte Povera and Land Art. It includes works and documents from artists such as Bruce Nauman, Jan Dibbets, Carl Andre, Donald Judd, Richard Long, Mario Merz, Sol LeWitt, Dan Graham, On Kawara, Charlotte Posenenske, Dan Flavin, Lawrence Weiner.

In 2014 he donated 372 of these works to the Prussian Cultural Heritage Foundation. Also found in the Kunstbibliothek is the Sammlung Marzona’s archive, which includes many thousands of books and periodicals, posters and invitations, recordings, films, photographs, and letters. This archive is accessible in the Kunstbibliothek to interested members of the public for research purposes.

“With Language to Cover a Page, Mueller has carefully aligned excerpts from disparate books—with differing typefaces intact—into two evolving pages. These pages crescendo before our very eyes, a flipbook of accumulating meaning, where with the passing of every page the narrative becomes aware of its own developing presence.” Derek Beaulieu

Thirteen Years: The materialization of ideas from 2002 to 2015: a cross-reference book of information on some esthetic boundaries: consisting of a bibliography into which are inserted text, critical essays, art works, documents, arranged chronologically and focused on so-called “greatest hits” and conceptual poetics with mentions of such vaguely designated areas as appropriation, post-naive, unboring boring, détournement, objet perdu, erasure poetry, or writing through, occurring now in the work of Michalis Pichler (with occasional political overtones), edited by Annette Gilbert and Clemens Krümmel.

Stefan Wartenberg and Joachim Spurloser are collecting, reconstructing and rhyming graffiti names as their poetic fundus. The names, numbers and abbreviations of graffiti enter into playful relationships that are shaped by a unique desire for eternity. The orders and distractions of the streets, flowed into lines of a poem, graffiti appears as what it always has been: world language and stuttering.

6.00 to 8.00 pm
The Sacred Conspiracy
Launch of the novel Headless with Shane Anderson, Matteo Pasquinelli, Hito Steyerl, and Caitlin Berrigan

Triple Canopy celebrates the publication of Headless, a murder-mystery by the elusive author K. D., with a reading and a rumination on offshore finance and human sacrifice.

Headless is a delirious romp through the world of offshore finance, conducted by a British ghostwriter who seems to have uncovered a sacrifice-obsessed, Bataille-inspired secret society of global economic elites who will do anything to maintain their power. The ghostwriter, John Barlow, is hired by the Swedish conceptualist artist duo Goldin+Senneby to investigate Headless, an offshore firm registered in the Bahamas. Barlow happily agrees to write up his investigation as a mystery novel, to be published under the name K. D. But soon Barlow is implicated in the decapitation of a police officer in Nassau, and his novel becomes a matter of life and death. The more he struggles to grasp the plot, the further he slips into the dark world of covert capitalism.

Artist Hito Steyerl, poet Shane Anderson, philosopher Matteo Pasquinelli, and artist Caitlin Berrigan will read from Headless and discuss the mystery genre, the difficulties of ghostwriting (and of employing ghostwriters), the free rein of capital, narratives of financial crises and credit economies, Georges Bataille’s formulation of sovereignty, the concept of xenospace, and the pleasures of fiction that insistently impinges on reality.

The poster of the CONCEPTUAL POETICS DAY 2015 is created by Cia Rinne.

The CONCEPTUAL POETICS DAY 2015 is organized by Michalis Pichler at Miss Read: The Berlin Art Book Fair in collaboration with Literaturwerkstatt Berlin

The CONCEPTUAL POETICS DAY is an annual event that explores the imaginary border between visual art and literature.