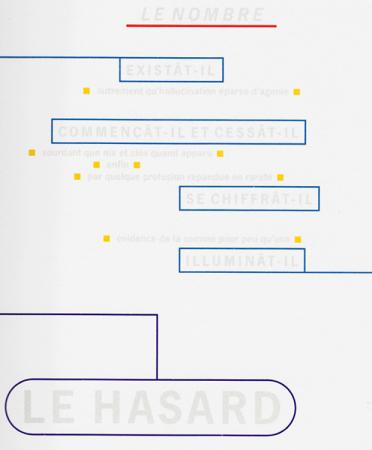 Choisi – one at a time dedicates this introductory exhibition on visual poetry to the books in the collection of Artphilein Foundation, expressly quoting Stéphane Mallarmé and, in particular, his poem Un coup de dés jamais n’abolira le hasard (A throw of the dice will never abolish chance). Visual poetry is an artwork integrating words and visual effects, in which the artist determines and organizes the layout of the words on the page or on the selected media, often by adding images taken from advertisements, tabloids and the mass media.

During his last lifetime, Stéphane Mallarmé wrote detailed and obsessive instructions on the design and printing of Un coup de dés jamais n’abolira le hasard, describing precisely the dimension and style of the typefaces and the page setting. He positioned the words in a disjoint syntax, with secondary sentences, dividing themselves in intervals, so creating the casual rhythm of the throw of the dice. The white spaces of the page, as Mallarmé wanted them, contribute to the visual experience of the reader and they have their own expressive strength equal to the words printed in black. Un coup de dés jamais n’abolira le hazard is preceded by a preface written by Stéphane Mallarmé, in which he describes the concept of subdivisions prismatiques de l’Idée (prismatic subdivision of the Idea) he aims to achieve. His poem presents itself as a cascade of words, distributed over 11 pages, without a defined plot, not even that of a captain throwing the dice trying to survive a sea storm. The text is imbued with symbolic references, transversal reading, allusions, ambivalences, and conducts the reader in a labyrinth of objective and metaphoric elements.

Only in 1914, 18 years after the poet’s death, Gallimard published Un coup de dés jamais n’abolira le hazard –in the ‘Nouvelle Revue Française’– following the layout instructions left by Stéphane Mallarmé. Since then artists, printer and translators, all also obsessed by the poem, tried to interpret and to pay homage to this artwork. On display there are, apart from the facsimile of the publication dated 1914 and of the version with the lithographs by Odilon Redon, the readings and the tributes to Un coup de dés by Jérémie Bennequin, Klaus Detjen, Michalis Pichler and Claude Rouelt.

Together with Calligrammes by Guillaume Apollinaire and the ‘parolibere’ by the futurist Filippo Tommaso Marinetti, Un coup de dés jamais n’abolira le hazard by Stéphane Mallarmé can be considered between the artworks anticipating visual poetry. Starting from the ’50 the neoavant-guardes began to be interested in the exploration of the potentiality of the expressive forms of words accompanied by image, until they achieved to create visual poetry as an independent artistic expression.