Skip to main content
The Ego and Its Own, Ugly Duckling Presse, 2015 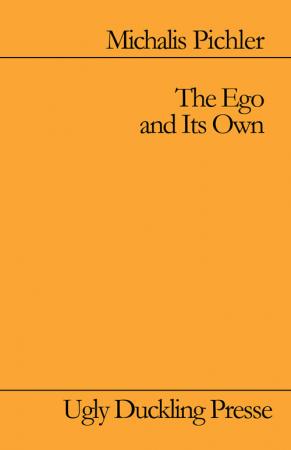 "Shame on the egoist who only thinks of himself!" — Max Stirner

Michalis Pichler's appropriation/erasure of Max Stirner's 1844 manifesto of individual anarchism, The Ego and Its Own, explores issues of translatability/in-translatability of poetry. The chapter titles and headers have been maintained, while the main text has been almost completely cut out save for the first-person-signifiers. Layout, typeset and dimensions follow the German version, which has been in print almost unchanged for the last 37 years by Reclam Universal-Bibliothek. Pichler's erasure is followed with an afterword by Annette Gilbert and an epilogue by Craig Dworkin. By adding a slipcover with bilingual glossary and a newly commissioned essay by Patrick Greaney, UDP's American edition, co-published with "greatest hits," attempts to make the book accessible to an English readership.

Michalis Pichler is a Berlin-based artist working between visual art and literature. He holds degrees in Architecture (TU Berlin) and in Fine Arts/Sculpture (KHB Weissensee). He works conceptually, through appropriation, uncreativism and the post-naive, often in series and with vernacular material. His work has been presented or exhibited at the Power Plant (Toronto), Christophe Daviet-Thery (Paris), x marks the bökship (London), the Museum of Contemporary Art (Denver), Literaturwerkstatt (Berlin), MOCA Skopje, Stichting Perdu  (Amsterdam), and Printed Matter (New York). Pichler's 15 books have come out with publishers the likes of Revolver (Frankfurt), Printed Matter (New York), AGRA Publications (Athens), Lubok Verlag (Leipzig), and his own imprint, “greatest hits” (Berlin).

"Demonic, obsessive, anarchic (impropre): "through a lucky chance or by stealth," «by force or ruse," as Stirner phrases it, Pichler’s creative plagiarism has taken the permission of impression, of the right to print, from both Stirner and from himself. At the same time, his textual choices, his paradoxical repetition of the ostensibly unique, insists on a "corporeal ego" that cannot be removed from the defining idea of this ideal project. The most abstract, conceptual gestures must always be embodied. Here then is conceptual art as confessional lyric, the spirit and the letter, the flesh made word. It is only through the flesh, Stirner counsels, that we can break the tyranny of the mind."—CRAIG DWORKIN, FROM THE EPILOGUE
"By rewriting The Ego and Its Own, Michalis Pichler shows how appropriation and its denigration have been central to modern European history and politics."—PATRICK GREANEY
" data-share-imageurl="https://www.buypichler.com/sites/default/files/15/10/ego-and-its-own-300dpi_0.jpg" style="position:fixed;bottom:0px;right:0px;">