Skip to main content
555 SCHNAPSPRESSE SONNETS, FOLDED, STAPLED AND SOLD IN CHUNKS OF 5 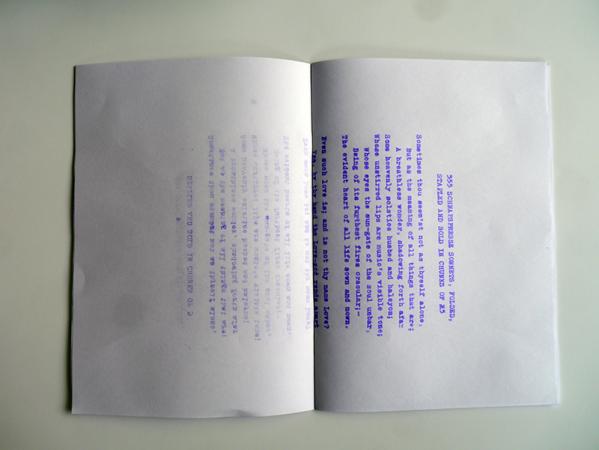 555 SCHNAPSPRESSE SONNETS, FOLDED, STAPLED AND SOLD IN CHUNKS OF 5 is a variation of a SONNET written by Rossetti in 1871, re-written by Carrión in 1972 and subsequently re-written by Pichler since 2009.
It is exploring the materiality of language, how books travel into the world, and how a fragmented printrun can still constitute an organic piece.
It is awkward to read, and the awkwardness certainly is half of its charme. Due to their rotated binding and blurring through the pages, they also look like Rorschach-drawings.
In 1972, Ulises Carrión produced his first artist's book "SONNET(S)" which consists of a 44 variations of a sonnet by Dante Gabriel Rosetti titled "Heart"s Compass".Using the langage like a material, Carrión writes Rossetti's poem over and over again on a typewriter, in slightly different versions. This book today is considered Carrión’s first “artists book”, where he still uses language, but quite differently.
In 2009 Michalis Pichler, in a similar approach but using a computer, probably word or open office, created 44 new variations and published a book titled "SOME MORE SONNET(S)". - On the last page of this book announced a multitude of OTHER SONNET(S), mostly imaginary .
555 SCHNAPSPRESSE SONNETS, FOLDED, STAPLED AND SOLD IN CHUNKS OF 5 are published by Lubok Verlag, Leipzig on occasion of SONNET(S) & OTHER SONNET(S) an exhibition at OEI, Stockholm in December 2014.